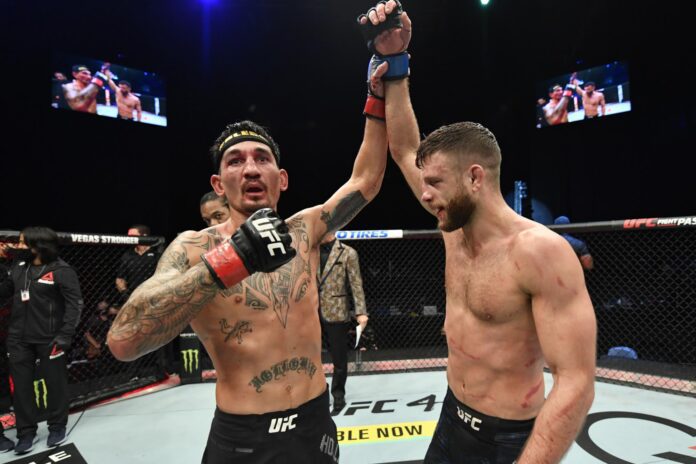 MMA fans are treated to great performances in the UFC every week. Some are showy knockouts, some are slick submissions, and some are full dominances. All three are equally intriguing to hardcore fans.

The following are five performances that stood out in the first half of 2021:

The energy in the building was palpable, as this was the first time the UFC had hosted fans in the United States since the pandemic began.

When ‘Thug Rose’ knocked out the Chinese fighter with a spectacular head kick in the first few minutes of the battle, the entire audience exploded. Namajunas became the UFC’s first female fighter to win a belt for the second time.

Emotions were so high that even Joe Rogan got teary-eyed after the fight while interviewing the newly crowned strawweight queen.

In the main event of UFC 261, Kamaru Usman did something which many thought was impossible: he defeated Jorge Masvidal.

‘The Nigerian Nightmare’ walked into the rematch with a chip on his shoulder after receiving criticism for his lackluster performance against Masvidal in their first fight. Usman had previously been described as a ‘boring’ fighter. Usman certainly silenced all of his detractors with this performance.

The welterweight champion’s highlight-reel KO vaulted him to the top of the UFC’s pound-for-pound rankings.

Few fighters are thrown to the top contenders right away in their UFC careers. However, there aren’t many fighters who fight like Jiri Prochazka.

Prochazka made an immediate impact in his debut, knocking out former title challenger Volkan Oezdemir in the second round. But it was his spinning back elbow knockout of Dominick Reyes that got everyone’s attention.

Prochazka possesses all of the characteristics required of a UFC superstar, including hair, appearance, and fighting style. After only two fights, the Czech fighter is regarded as the light heavyweight’s next challenger.

Dustin Poirier knocked out former lightweight champion Conor McGregor at UFC 257 in one of the best performances of his career.

Many people predicted that the rematch would be similar to the first fight, in which the Irishman knocked out ‘The Diamond’ in the first round.

However, Poirier came in with a brilliant game plan and began attacking McGregor’s legs. The repeated blows eventually took their toll, and Poirier emerged victorious as ‘The Notorious’ lay in the octagon’s corner.

The two fighters are set to meet again in a trilogy bout on July 10th where ‘The Diamond’ will be looking to recreate the magic.

Max Holloway knows how to put on a show like no other. In his five-round fight with Calvin Kattar, the Hawaiian did just that.

‘Blessed’ put on a striking match, reminding everyone that he is a level above the rest of the UFC’s featherweight fighters. The two fighters clearly had a significant skill difference.

Holloway landed 445 significant strikes on Kattar, which is the most in UFC history. The previous record was 290 strikes, which the Hawaiian also held.

At one point during the fight, ‘The Blessed’ began yelling at the commentators, “I’m the best boxer in the UFC!”

Holloway’s performance has made it clear that he wants nothing more than a shot at the UFC featherweight title.

Read more: Top 3: Blockbuster dream battles that UFC should look to stage in 2021