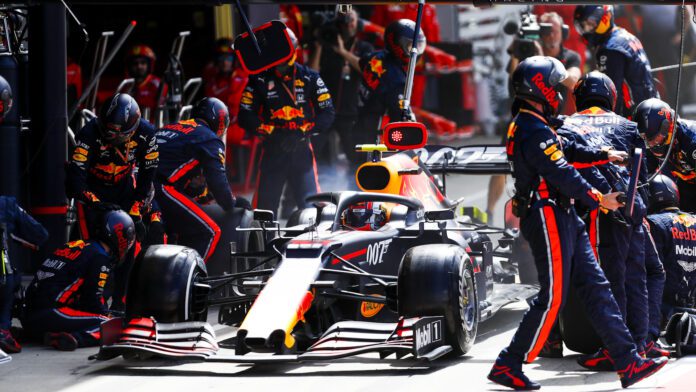 Formula 1 is a sport completely dependant on time and every millisecond counts in helping a driver claim victory.

While it is the job of the driver to gain those precious seconds, there are other people in the team who are involved in the process too.

The pit crew is one such team that is crucial for the success of the driver and determining his on-track position.

Evolution of the pit-stop

Through the years, the pit crew has been involved in setting various types of records, not just within F1 but through the entire world of motorsports.

Formula 1 hosts pitstops that are significantly faster than the ones in Indycar, NASCAR, and WEC.

Over the years, pitstops have seen tremendous evolution considering it took up to 30 seconds to get a car going back in the 50s.

Today, pitstops take around 2 seconds and are highly organized.

This season, the fastest stop was clocked by Red Bull driver, Max Verstappen during the Azerbaijan Grand Prix at 1.98s.

The working behind a stop

It is difficult to imagine what all it takes to execute a perfect stop considering it is over in the blink of an eye.

Currently, it takes around 21 people to get the car ready again.

When it comes to tyres, a team of 3 people works to switch a tyre. One mechanic holds the wheel gun, one removes the wheel, and the third places a new one.

This brings the number up to 12.

Now, there are two people who lift the car with the help of special trolleys, one in the back and the other in the front.

There is an extra mechanic who will fill in during inconvenient situations.

A team of two holds the car in place to prevent any kind of destabilization during the changing of the tyres.

Two more mechanics make important adjustments to the front wing of the car.

Finally, two more mechanics oversee the entire process and keep an eye on the pitlane. It is up to them to ensure that the car exits the pitlane safely.

This brings the total number to 21 who work to execute sub-2 second pitstops.