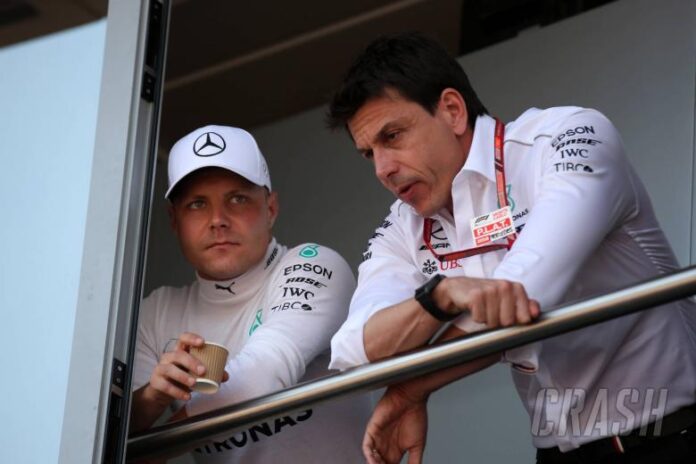 Mercedes driver Valtteri Bottas has reacted to Toto Wolff’s claims saying he was out of position for his Monaco GP pit stop.

Bottas was having a great race, and might have even won it had bad luck not struck. When he pitted on Lap 30, Mercedes couldn’t remove his front-right wheel no matter what they did. As a result, he had to retire from P2.

Mercedes Team Principal Wolff resorted to blaming Bottas after the race. He claimed the Finn was off by a few centimetres from his pit stop marking.

Ahead of this weekend’s Azerbaijan Grand Prix, Bottas was quizzed on Wolff’s comments. He showed genuine surprise, and didn’t mince his words.

“I saw the video and for me, it was pretty spot-on where I stopped,” he said. “So I was quite surprised.”

It took Mercedes some days to finally remove Bottas’ wheel from his car. Bottas said the team had put corrections in place to ensure the incident never happens again.

“The main thing, first, was it was nice to hear when we got it off,” he explained. “And of course, we as a team had to maximise the learning from it.

“There was a detailed analysis of everything what happened, why it happened, how can we (sic) prevent that ever happening again in the future. So it’s really all about learning the issue and correcting it.

“I think the team fully understands it now, and we’ve made corrections for that, and hopefully don’t have to experience it again,” he concluded.

This season has been Bottas’ worst one yet. With him suffering his worst start to a season at Mercedes, things weren’t looking good already. Then came the Monaco debacle. He admitted it took some days to get over his disappointment.

“Personally for me, it took a couple of days, I have to say,” he said. “It’s not been the best start of the season.

“That kind of an issue, when it hits you, and obviously when your target is to get some good points, it’s disappointing. But I got over it. I’ve found my ways to get through it, and I’m keen to race again,” he stressed.

Read more: Valtteri Bottas admits he was on the verge of quitting Mercedes after team orders – “Just really tired”

“Hamilton and Verstappen are going to come to blows”: Ingredients laid...

Max Verstappen wants to stay at Red Bull but might leave...