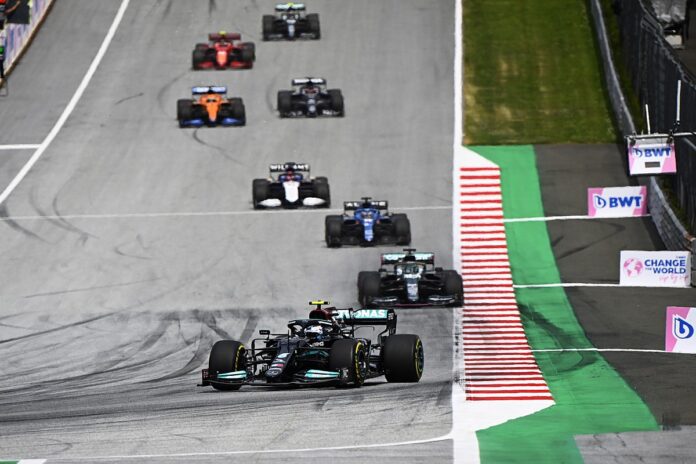 Valtteri Bottas started the Sunday race from the third row of the grid at the Red Bull Ring for the Styrian Grand Prix.

However, before that, he had a stellar performance after qualifying at P2 but earned a three-place penalty which ruined things for him.

Irrespective of that, Bottas was pleased with his performance and gave credit to his teammate Lewis Hamilton and his team.

Bottas was struggling with his car on Friday and did not know how to go ahead with the rest of the weekend.

But Hamilton and his crew helped him figure out a proper setup for the qualifying and the race.

That worked out well for the Finn as he beat his teammate by a mere 0.03s in the qualifying.

He credited his performance to his teammate at the post-qualifying press conference.

What did Bottas say?

“I honestly think it was a good qualifying. I think I’ve been a little bit lost with the set-up during the weekend so far. But being able to go in the right direction with the set-up,” he said.

“We’ve been working closely with Lewis as well to try to find the optimal set-up and definitely got some guidance from his side of the garage this weekend. Because I was definitely lacking a bit of pace on Friday and was a bit confused about which way to go.

“And yeah, we were working as a team and found the right direction,” he concluded.

Grid penalty was a hindrance

While the Finn had an incredible qualifying session, he felt bad for earning a penalty.

“That last lap, there were definitely not two-tenths on the table. So, I think Max and Red Bull were faster today. It was a good lap and I’m pleased for that,” he said.

“Of course, it’s a shame I have the penalty but obviously the job today was to try and maximize the situation,” he stated.

Bottas surely managed to up his game at the final race of the Styrian Grand Prix.

After a fierce battle with Red Bull’s Sergio Perez, Bottas managed to score a P3 finish winning the podium on Sunday.

This comes during the time when there are rumors about the Finn being replaced by George Russell.

Read More: Toto Wolff almost quit Formula 1 – “Beating myself up to come to a decision”