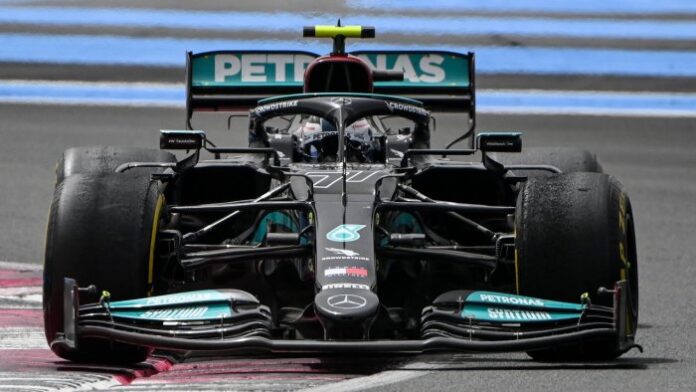 After two horrific races in Monaco and Baku, Mercedes have managed to up their game at the French Grand Prix. However, Valtteri Bottas has expressed criticism on how his team handled the race strategy.

Bottas wanted to go for a two-pitstop race while his team went ahead with just one.

This led his tyres to lose out on grip which allowed Max Verstappen to charge ahead and take the lead after countering Lewis Hamilton.

Bottas on the team radio

“Why the f*ck you didn’t listen to me when I told you it was gonna be a two-stopper? F*cking hell!” Bottas vented over the radio.

The Finn has had a tough previous two races and the messed-up strategy in France is just adding salt to his wounds.

Towards the end of the race, Bottas was overtaken by Sergio Perez pushing the Mercedes driver into fourth place and out of the podium.

Similarly, Lewis Hamilton was overtaken by Max Verstappen who went on the win the Grand Prix.

After Max overtook Bottas and then Hamilton, the outfit might be kicking themselves in the shin for not listening to their #77 driver.

As a result, Red Bull managed to claim a 1-3 podium finish pushing them far ahead of Mercedes in the constructor’s championship.

Paul Ricard was a stronghold for Mercedes and Red Bull have managed to dethrone the Silver Arrows yet again.

Read More: Valtteri Bottas lashes out at Mercedes’ sloppy strategy – “Should have done a two-stop”