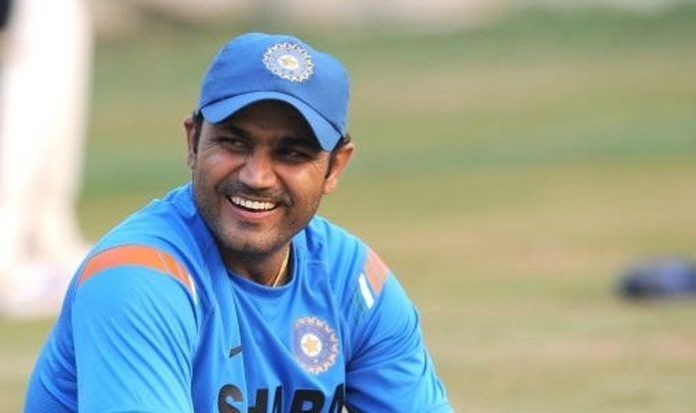 In India, cricket is regarded as a religion. Fans treat players as if they are Gods. Virender Sehwag, better known as “Viru” or the “Nawab of Najafgarh,” is one such golden player.

Virender Sehwag is a former Indian cricketer who is credited with sending shivers down the bodies of even the most prolific bowling accounts. Till date, he is the only Indian cricketer to score two triple centuries.

Sehwag maintains his cool even when under extreme pressure. He famously even used to whistle during his innings. He featured for India as a hard-hitting right-handed opener and a part-time right-arm off-spinner.

Sehwag has a tremendous fan following in the world. He was born on October 20th, 1978 in Najafgarh, Delhi. His father, Mr Krishnan Sehwag, was a grain dealer and his mother, Mrs Krishna Sehwag, was a homemaker. Mrs. Aarti Ahlawat is his wife.

Sachin Tendulkar is his favourite cricketer and many pointed to a similarity between their games when he was breaking into the national team.

In Test cricket, he holds the record for the fastest triple century. He is the only batter in history to have scored more than 7,500 runs as an opener in both Tests and ODIs.

Among all cricketers who have scored 2,000 or more Test runs, Sehwag has the highest ever Test batting strike rate. In addition, he is the only player to be a part of two straight double-century partnerships in Test innings. He accomplished this feat twice.

Sehwag’s total net worth in 2021 is estimated to be $45 million, that is, Rs 351 crores. His average monthly salary is more than Rs 2 crores. The main sources of income are from his coaching role in the IPL, brand endorsements and investments.

Virender Sehwag has purchased a residence in Delhi’s Hauz Khas neighbourhood for himself and his family. This is one of the city’s most prestigious neighbourhoods.

Sehwag owns a vast automotive collection, which includes some of the world’s most prestigious luxury automobiles. Luxury cars such as the Bentley Continental Flying Spur and the BMW 5 series are among the brands he owns.

Sehwag was paid a whopping $5.7 million dollars by BCCI during his playing days. He is also the head coach of Kings XI Punjab, with whom he has inked an IPL contract for $1.8 million.

In November 2001, during the second Test match between India and South Africa at St George’s Park in Port Elizabeth, Sehwag was given a one-test ban by ICC Match referee Mike Denness for “excessive appealing.”

He was one of six Indian players who were given suspensions, four of which were for some time. The bans’ extraordinary harshness sparked an international cricketing, political, and administrative crisis, with the Indian cricket establishment threatening to cancel the tour unless match referee Mike Denness was removed from the third Test match.

Mike Denness was backed by the ICC, while the South African board backed the Indian cricket establishment by refusing to let him inside the stadium on the opening day of the third Test match.

The match was termed an ‘unofficial’ and ‘friendly five-day match’ by the ICC. The following England journey to India was jeopardized when India selected Sehwag for the Test squad.

Following this development, the International Cricket Council (ICC) issued a warning that any match in which Sehwag is a member of the cricket team will not be considered an “official” Test match until Sehwag has completed his one-match suspension.

Sehwag was dropped from the line-up for the first Test against England after consultations between the ECB and ICC, keeping in mind “the greater good of cricket”.