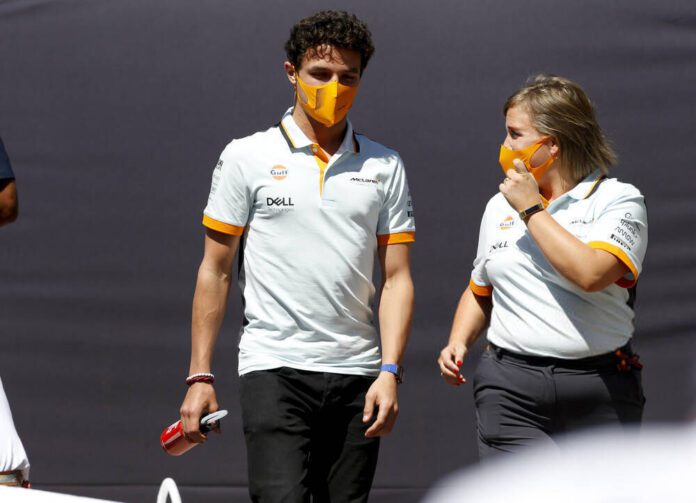 Considering the booming social media and its importance, every driver today needs a PR manager. Lando Norris is no different.

Be it press conferences or media interviews after a race, it is the job of the PR executive to handle all the matters.

Lando Norris is assisted by Charlotte Sefton, who is his PR manager.

While the Brit has his focus set on the race, Sefton ensures that things off the track remain under control.

She is often found next to Norris during track-side interviews, as she guides him from one microphone to the next in the media area.

After spending two years with Jardine, she joined McLaren as a PR officer.

Through the years, she moved up the ranks and earned the role of F1 Communications Manager in January this year.

Apart from helping Norris, she is also responsible for car launches. Sefton is among the most visible figures in the McLaren team today.

Sefton talks about her F1 obsession

Even though she is an impactful figure in Formula 1 today, her obsession with the sport goes back to when she was around seven years old.

“My first memories of F1 are from the age of about seven when Grand Prix meant loads of noise on the TV after Sunday lunch,” she said.

Before long I was hooked, my Dad and I ardently supporting different teams and shouting at the TV. It took over my life, and from then on I knew I wanted to pursue a career in F1.”

Ever since he joined McLaren back in 2019, Norris has been termed as one of the funniest drivers on the grid.

Considering his warm relationships with everyone on his team, they hold him in high regard. He shares a similar relationship with Sefton.

Sefton was also close to Carlos Sainz when he drove for McLaren. She was even seen in the docuseries by Netflix – Drive to Survive waiting for news on Sainz’s podium in the 2019 Brazilian Grand Prix.