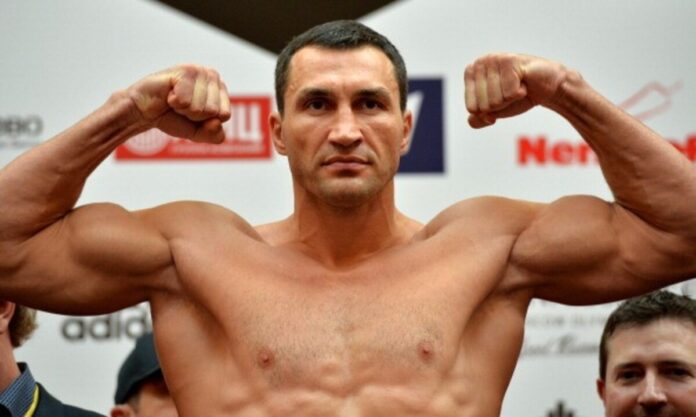 Klitschko is a highly strategic and intelligent boxer and counted among the best heavyweight champions of all time.

Apart from great footwork and mobility, he is also known for his exceptional knockout power, using a strong jab, straight right hand, and left hook.

This is unusual for boxers of his size and stature.

Klitschko represented Ukraine for the 1996 Olympics during his amateur career. He competed in the super-heavyweight division and took home a gold.

He turned into a professional the same year and fought Chris Byrd in 2000. He defeated Byrd and won the WBO heavyweight title.

In 2003, he faced the first loss of his title after a knockout loss to Corrie Sanders. This was followed by another loss to Lamon Brewster in 2004.

Following this, Klitschko hired Emanuel Steward as his trainer. This was a partnership that lasted for eight years and ended when Steward died in 2012.

Steward gets the credit for Klitschko’s transition from an aggressive fighter to a more defense-oriented boxer; similar to what he had done with Lennox Lewis from 1995 to 2003.

Wladimir and his brother Vitali Klitschko, who is a boxer himself, dominated heavyweight boxing from 2004 to 2015. This period was termed the “Klitschko Era” of the division.

In 2006, Wladimir was able to win back a portion of the world heavyweight championship after triumphing over Byrd following a rematch.

He claimed the IBF and IBO titles.

In 2008, he won his second WBO title after defeating Sultan Ibragimov.

Klitschko was presented with the Ring title in 2009. Lastly, he even won the WBA title after defeating David Haye in 2011.

In 2015, Klitschko was titled the pound for pound world’s best active boxer by BoxRec. While in November 2014, he reached second-best on The Ring‘s pound for pound list.

This was a peak in his career.

From defeating Alexander Povetkin in October 2013 to his loss against Tyson Fury in November 2015, Klitschko was declared the lineal champion by the Transnational Boxing Rankings Board.

Klitschko’s fights had the ability to generate a global television audience of 300–500 million.

Additionally, Klitschko also has records for most wins and title defenses of the unified championship in the history of professional boxing.

Wladimir and Vitali entered into the Guinness World Records book as two brothers with most world heavyweight title fight wins (30 during the time; 40 in 2020).

Klitschko was also honored by his induction into the International Boxing Hall of Fame Class of 2021. This was after being elected in the first year of when he was eligible.

Klitschko was born in Semipalatinsk (now Semey) in Kazakhstan during the time of the Soviet Union.

His father was Vladimir Rodionovic Klitschko (1947–2011) who served in the Soviet Air Force and was a military attaché of Ukraine in Germany.

His father was also among the commanders in charge of cleaning up the Chernobyl disaster in 1986 but was ultimately diagnosed with cancer.

Klitschko is the younger brother of Vitali Klitschko, former WBC, WBO and Ring magazine heavyweight champion. Vitali is the current Mayor of Kyiv.

Klitschko got into a relationship with American actress Hayden Panettiere starting in 2009.

In October 2013, Panettiere revealed that she was engaged to Klitschko. They have a daughter together who was born in December 2014.

According to Panettiere’s mother, Lesley Vogel, in August 2018, the couple had split yet again. However, the two of them were on good terms on the account of their daughter.

Wladimir and his brother Vitali have never fought off each other in a professional setting. This was because of a promise they made to their mother to never fight against each other.

In 2008, Wladimir had a photo session with Karolína Kurková held for the Vanity Fair magazine. After this session, Kurková disclosed that she is in a relationship with the boxer.

Klitschko is a multi-linguist and speaks 4 languages. These include English, German, Russian and Ukrainian.

On 29 March 2012, Klitschko put his Olympic gold medal up for auction and sold it to a buyer who bid $1 million.

Klitschko wanted to use the money to provide support to Ukrainian children. But the medal was returned to him as a gesture of respect for the boxer.

British challenger Tyson Fury accused Wladimir Klitschko of manipulating the canvas of the ring where their fight was about to take place.

He warned the fight could be canceled if the issue was not resolved.

However, discussions took place which led the fight to go ahead as planned.