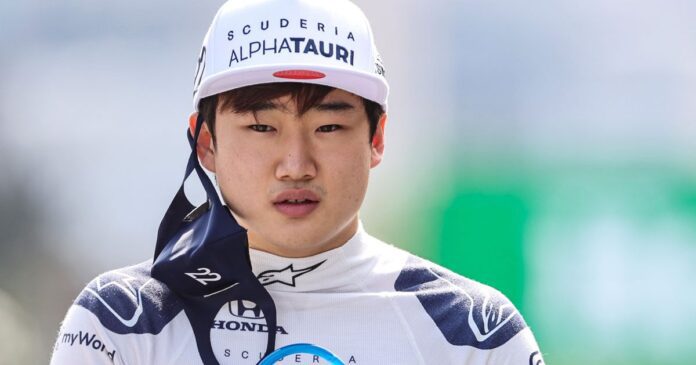 AlphaTauri driver Yuki Tsunoda had another angry outburst during the second free practice ahead of the Austrian Grand Prix.

During the hot lap of the afternoon session, Tsunoda came across Antonio Giovinazzi‘s Alfa Romeo.

That prompted the Japanese driver to take to the team radio and say: “This idiot is using DRS all the way!”

This is not the first time that the young driver has gone on such rants. His engineer too is often not spared from his wrath.

Tsunoda began his F1 journey with a stellar performance back in Bahrain. However, he has had a difficult time ever since.

In the sister AlphaTauri, Pierre Gasly has been having a better day in office as compared to Tsunoda.

As a result, Gasly has set the bar high for his teammate to climb to thanks to his experience in the sport.

However, on Friday at the Red Bull Ring, Tsunoda managed to finish in sixth place and was faster than Gasly, who came in seventh.

What did Tsunoda say?

“We’ve had a decent day and are happy that we’ve maintained the pace from last week,” he said.

“We have worked hard on our longer running, as that was something we found we struggled with during the race, and I think this has been really positive.

“They weren’t the easiest conditions out there, the circuit is much colder this week and then we had some rain towards the end of FP2.

“My main objective today was to gather as much data as possible ahead of Qualifying and the race, by slowly building up my lap times and I’ve achieved that without making any mistakes, so I’m pleased with that,” added Tsunoda.

“I was playing catch-up a little bit today, having missed FP2 last time out and obviously the race, so we spent time working on our long-runs and trying to understand the tyres,” the Frenchman said.

“I think there were a lot of positives today and the pace is still there.

“However, we were slightly struggling in these different conditions, so we have a few things to look at tonight with the engineers and then we can make some changes for tomorrow,” he concluded.

Read More: Stand-up comedian calls out Lewis Hamilton – “Would get his a** beaten if he didn’t drive a Merc”