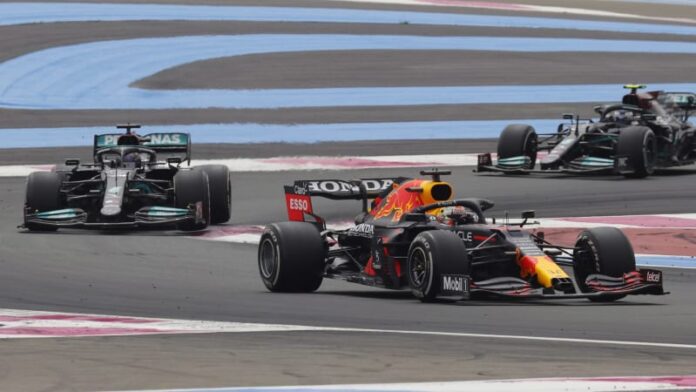 Towards the end of the race in Paul Ricard, Max Verstappen was on Lewis Hamilton‘s tail looking to score a victory for Red Bull.

When Hamilton was under pressure from the Dutchman, former F1 driver Nico Rosberg noticed an ‘unusual’ move from the Mercedes driver.

Even though Verstappen started the race from pole position, he ran wide during the first few corners of the circuit.

This pushed Hamilton into the lead.

According to the 2016 World Champion, this was due to Verstappen being unprepared for the conditions on the track.

“Turn one, it was clear Max took too much risk and speed,” Rosberg said.

“Maybe lack of preparation with the 40km wind. Low grip was always going to happen.

“Bit of a mistake there, but then on just an awesome job from Red Bull. Some rather big mistakes from Mercedes on strategy,”

Rosberg went on to add that Verstappen’s move on Hamilton was unusual as the Brit did not counter it.

If there is one driver who knows Hamilton’s strategies in and out, it is Rosberg. The former teammate of Lewis said that it was ‘unusual’ on his part.

“Unusual from Lewis, close the dam door! No? Usually, Lewis is the best one-to-one racer. I’m surprised he didn’t try, at least try and brake late. A bit soft from Lewis somehow,” he added.

Read More: Nico Rosberg has words of caution for Mercedes as he sides with Red Bull dominating the grid