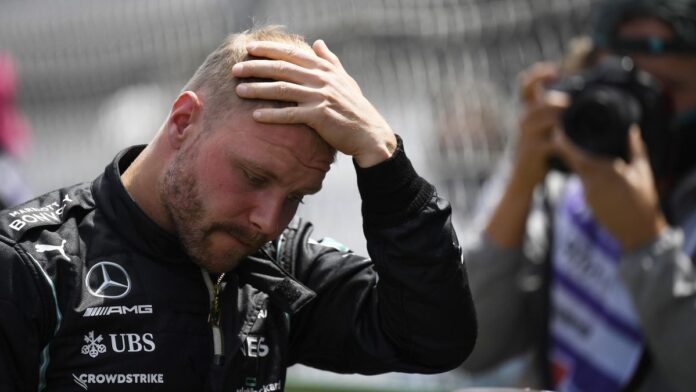 Mercedes driver Valtteri Bottas has been having a difficult 2021 season so far with the Azerbaijan Grand Prix being his latest mishap.

After a detailed analysis, Mercedes have revealed what actually caused the unfortunate result for the Finn.

According to Technology Director Mike Elliott, Bottas had decided to go for a high-downforce configuration which was actually a mistake.

Baku was a disaster for Mercedes

The entire weekend in Baku, Bottas was lacking pace and was unable to clock in a decent lap time.

Due to this, he was the 10th fastest on the grid and finished the race at an unfortunate P12 while his teammate Lewis Hamilton finished P15.

Hamilton, in contrast to Bottas, decided to opt for a low-downforce set-up.

As a result, the Brit was a lot faster and had it not been for a mistake that dropped his place from P2 to P15, he would have probably claimed a victory.

What did Elliott say?

“The setups were fairly similar, probably the biggest difference between the two cars was the wings that they were running,” Elliott said.

Mike Elliott also revealed that it was Bottas who decided to go for the high downforce wing which he felt would be faster for him.

Tyres need to be heated to deliver performance

“Getting heat into these tyres is really important and if you can go a little bit quicker, put a little bit more energy into those tyres the car will go quicker as a result and you end up in a positive performance spiral,” Elliott continued.

“So, it’s more important that Valtteri was happy with his car, that he felt confident in his car, than the small difference the simulation predicted in ultimate performance.”

Bottas had decided to go against the computer simulations but was unable to get heat into his tyres due to the complexity of the circuit.

This led to him falling way back on the grid.

Read More: Toto Wolff’s hypocrisy making headlines in Russia – “Everyone has started to laugh at this”

Kimi Raikkonen lashes out at his engineer during Austrian GP –...

“No instruction to collude”: Horner says Red Bull and AlphaTauri do...