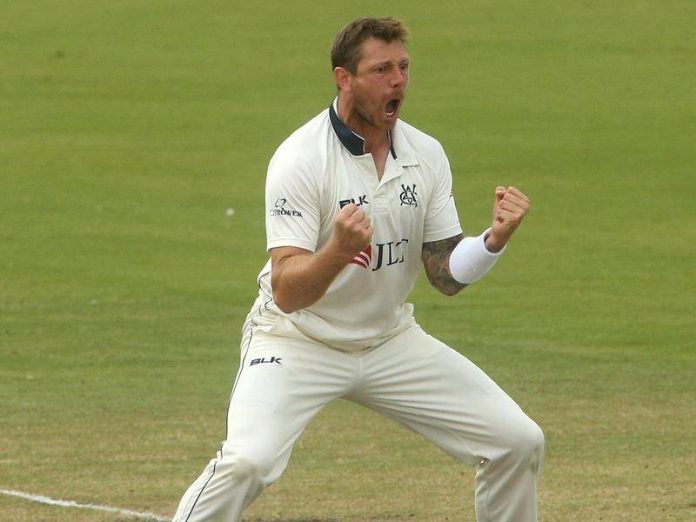 James Pattinson, an Australian fast bowler, has withdrawn from international cricket after believing he would not be able to compete for an Ashes selection.

Pattinson had started the pre-season wanting to participate in the England series, but the Covid-19 lockouts had delayed his start to the domestic summer. With both Victoria and New South Wales unable to play in the early part of the season.

He announced his retirement from international cricket on the day it was revealed the two sides would play back-to-back Sheffield Shield matches in Sydney commencing next week. Pattinson had been ruled out of the first Shield match due to injury.

However, he plans to continue playing local cricket in Australia and has hinted at a comeback to county cricket.

During an injury-plagued Test career that began in style in December 2011. When he claimed a five-wicket haul on debut against New Zealand at The Gabba. The 31-year-old took 81 wickets in 21 Tests at an average of 26.33.

Between 2011 and 2015, Pattinson played in 15 one-day internationals and four T20 internationals, and he will continue to play domestic cricket.

“Everyone who has played with Patto has thrived on his competitive nature and the sheer pride he takes in playing for his country,” Bailey said.

“James epitomises what it means to play for Australia, the sacrifices you make and the hurdles you have to overcome on the journey.

“But his record speaks for itself, he has been a wonderful player. We would have loved to have seen a lot more of him over the years.”

Pattinson stated he was comfortable with his decision to retire from international football.

“Now I have made the decision I am hoping to really enjoy the last three or four years of cricket,” he said.

“I have had a great time over the years and thank Cricket Australia for the opportunities, the faith they have put in me and of course all of my teammates through the journey.

Pattinson debuted on the international scene against New Zealand in 2011, taking 5/27 in the second innings of Australia’s nine-wicket victory. With fourteen wickets in the two-Test series, he was named Man of the Series.

With 6-108 in his following Test against India at the MCG, he replicated the feat. He returned from a brief injury layoff against India with another five-wicket haul in Chepauk, the only time an Australian fast bowler has done so at the venue.

He went on to play six more Test matches after that, although he was limited by a variety of injuries. Including back surgery, and the strength of Australia’s pace bowling stocks at the time.

His final Test came against New Zealand in Sydney, the team against whom he made his debut a decade before.

The strong start Pattinson had

With a fifer on Test debut and a Player of the Series effort in the team’s victory over New Zealand in 2011. The bowler has enjoyed a bright start to his international career.

He last played an ODI in September 2015, before retiring from cricket due to a back issue. He did, however, make a comeback to Test cricket in 2019, appearing in the Ashes series.

Pattinson made his Test debut against New Zealand in the 2011/12 home series. In the first Test in Brisbane on December 1, 2011.

He grabbed five wickets for 27 runs in the second innings of his maiden Test. Helping Australia to a nine-wicket victory.

He then took five wickets in the first innings of the second test. Earning him the title of Man of the Series, with fourteen wickets at an average of 14.00 over the two tests.

With match figures of 6/108 and 55 runs, he won another Man of the Match award in his next Test. The 2011 Boxing Day Test against India.

The debut of James Pattinson

Pattinson represented Australia in the 2008 Under-19 World Cup in Malaysia. Playing for the Dandenong Cricket Club in Victorian Premier Cricket.

Pattinson set a new best bowling in a List A innings record for Victoria on December 23, 2009. When he took six wickets for 48 runs in ten overs.

He was named to the Mumbai Indians roster for the 2020 Indian Premier League on September 2, 2020. As a substitute for Lasith Malinga, who stepped out due to personal reasons. Pattinson made his IPL debut in the 2020 season and went on to become a regular member.

After a torn side ligament during the 2012 home season, he returned to the Australian squad.

On his return, he pulled up a 5-wicket haul in the first Test against India in March 2013, dismissing Virender Sehwag, Murali Vijay, Cheteshwar Pujara, MS Dhoni, and Ravindra Jadeja on a flat Chepauk surface.

He bowled at a steady rate of over 145 km/h throughout the match.

James Pattinson later returned to the Australian Test team in December 2015 during the West Indies tour of Australia.

Pattinson took his fourth five-wicket haul in his first Test match back, grabbing 5/27, equaling his previous best bowling stats. He also went back to his former bowling motion. Which provides him better control and a speed that approaches 150 km/h, but at the risk of reinjuring his back.

Pattinson retires from international cricket and becomes a family guy

Pattinson announced his retirement from Test cricket in October 2021, before of the Ashes series in 2021–22.

He had been suffering from a knee problem. Which had limited his Test appearances due to a number of other injuries.

“Leading into pre-season I really wanted to give the Ashes a crack but in the end I haven’t had the preparation I would have liked heading into the coming season,” Pattinson was quoted as saying by cricket.com.au in a statement.

“It was then I felt that instead of trying to play at the very highest level, knowing I have only got three or four years of cricket left,

“I would focus more on Victoria, helping the young guys develop, perhaps some cricket in England and spending more time with my family.”

Gautam Gambhir warns teams to be wary of Pakistan in upcoming...