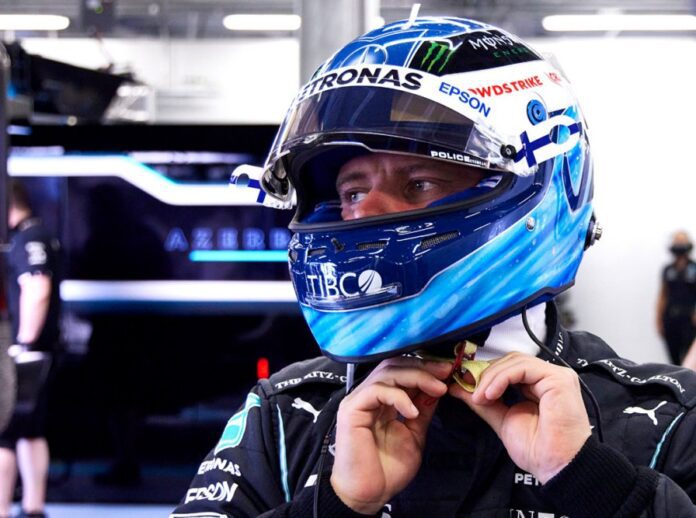 Mercedes had a mixed performance in Baku with Lewis Hamilton at the front and Valtteri Bottas finding himself all the way at the back in 10th place during qualifying.

This vast difference between the two drivers made the Finn question his lack of pace. He also went on to pin the blame on his car.

Mercedes found themselves at the back as the F1 paddock headed into the Baku weekend. The biggest reason for this was that the team was finding it difficult to get their tyres up to the right temperature.

However, Hamilton managed to find a solution to the problem by opting for a lower downforce rear wing. This earned him a front-row start.

Bottas, unfortunately, was in a more difficult position, especially after the red flags were waved.

What did Bottas say?

“It was pretty messy as expected with the red flags, yellow flags everything,” said the Finn. “From my side, the last run I missed like many others, but something is still not right.

“I’m so far off the pace and I have no clue why. I have no explanation. I’m losing every corner. If I push harder, I’m in the wall. So that’s the limit. It’s strange.

“Coming here, I thought we would be fighting at the front. Lewis is at the front, in the fight, and I should be as well. I have no explanation. I think something is wrong.”

Bottas had decided to go for a higher downforce rear wing and was only 1.2 seconds slower than Hamilton.

But sadly, there were many cars between the two drivers and the Finn could only manage 10th place.

This would count as his poorest start since the 2019 Abu Dhabi Grand Prix.

The beauty of F1 is that things can take an unexpected turn at any moment. The biggest example of this is Daniel Ricciardo.

Read More: Sergio Perez net worth: How much does the Red Bull racer earn and where does he invest?