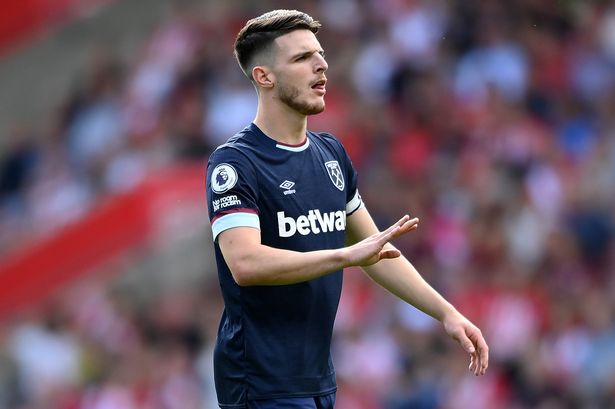 The 2022 Qatar World Cup qualifications are under underway, with nations battling for a chance to compete on the largest platform in football. Matches were rescheduled due to the Covid epidemic, but normal service was resumed as England kicked off their qualification campaign in style.

In a game plagued by controversy, they defeated Hungary in Budapest. The final result was 0-4 in favour of England, however, there was a peculiar incident during the match. A

fter Sterling scored, many fans tossed beer cups onto the pitch, and Declan Rice scooped one up and delivered the appropriate reaction. Manchester City’s new guy Jack Grealish also joined in the fun.

Declan Rice has a beer on the field

In the 55th minute, an event occurred. Grealish took over when Rice won the ball in the midfield and sent the ball to the overlapping Mason Mount. Mount then into the box and laid out a beautiful cross for Raheem Sterling to tap in.

Fans began throwing beer mugs and other objects at the England players as the winger sprinted to the corner flag. Rice, on the other hand, had a different plan. He then proceeded to drink beer from a cup thrown by the crowd. The ideal retort to the rowdy crowd. Grealish couldn’t help himself as he did the same.

From start to finish, the English contingent dominated the game. Harry Kane headed England’s second goal after Sterling had opened the scoring. England appears to be in complete control of their group, with goals from Harry Maguire and Rice. Furthermore, Kane praised his teammates’ performance and offered them full credit.

“I have to give the credit to England. The way Hungary play, when the game is tight their energy levels are up etc, but as soon as the first goal went in they didn’t have a plan B,” said Kane as SkySports.

Despite their heart-breaking loss in the Euros final, the English team is determined to win games and reach Qatar. They appear to be more focused than ever on winning a major tournament.