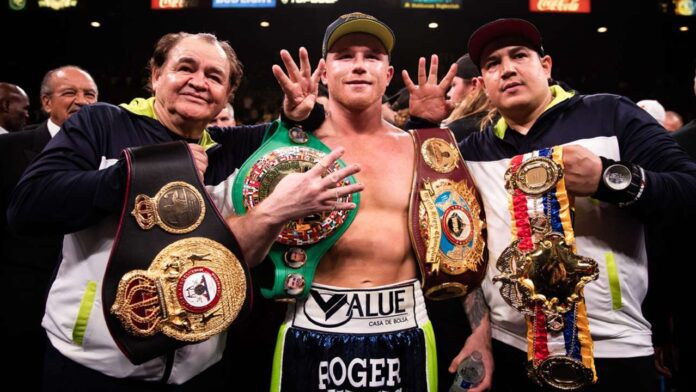 Alvarez currently holds the WBA (Super), WBC, and Ring magazine belts, as well as the WBO title, which he has held since May 2021.

Alvarez is noted for his ability to exploit openings in his opponents’ guards while dodging punches with head and body mobility. He is also recognized for being a powerful body puncher.

As of June 2021, Alvarez is listed as the top active boxer in the world, pound for pound, by BoxRec; The Ring; the Boxing Writers Association of America; the TBRB; and ESPN.  BoxRec, The Ring, TBRB, and ESPN all rank him as the world’s top active super middleweight.

Alvarez revealed in an interview that he was born in the outskirts of Guadalajara, Jalisco, although his family is from Los Reyes, Michoacán. His family relocated to Juanacatlán, Jalisco when he was five years old. Growing up on his family’s farm, he learnt to ride horses, something he still does now.

Alvarez is the youngest of eight children, seven of whom are males; all of his brothers are professional boxers as well. Among his brothers are welterweight boxers Ramón Alvarez, Ricardo Alvarez, and Rigoberto Alvarez, the former WBA interim world champion.

Alvarez began boxing when he was about 13 years old, inspired by his older brother Rigoberto’s debut as a professional fighter. He earned silver in the Junior Mexican National Championships in Sinaloa in 2004. At the age of 15, he earned the 2005 Junior Mexican National Boxing Champion in Tuxtla Gutiérrez, Chiapas. He has a 44–2 amateur record with 12 knockouts.

Because his trainers at the time, father-and-son combo Chepo and Eddy Reynoso, were unable to locate acceptable junior opponents for him, Alvarez turned professional at the age of 15, shortly after winning the Junior Nationals. He knocked out eleven of his thirteen known opponents in his first 19 months as a professional, all of whom were much older.

However, the elder Reynoso indicated in 2013 that Alvarez had fought ten more times in that stretch, winning all ten by knockout (KO), but that these fights (all in minor venues in the Mexican state of Nayarit) were so badly documented that it was not worth the bother to seek to rectify the record.

During his three years as a professional, he fluctuated in weight, having two documented fights at the light-welterweight limit of 140 pounds before settling in the welterweight division at 147 pounds.

On 20 January 2006, in his home town of Guadalajara, Jalisco, Alvarez defeated future IBF lightweight champion, Miguel Vázquez, in his third official fight. In a rematch on June 28, 2008, Alvarez defeated Vázquez one more.

On that same fight card, he established world history by fighting alongside all six of his siblings, with Canelo being the youngest. The main drawback was that three of them did not win their professional debuts.

The other four more experienced brothers were victorious.  On March 6, 2010, he knocked out Brian Camechis in the third round in Tuxtla Gutiérrez, Chiapas.   lvarez then retained his WBC-NABF welterweight title by defeating José Cotto on the undercard of Floyd Mayweather Jr. vs. Shane Mosley.

On March 5, 2011, Alvarez won a unanimous decision over European welterweight champion Matthew Hatton for the vacant WBC light middleweight title. The fight, which took place at the Honda Center in Anaheim, California, was telecast on HBO.

Alvarez won the WBC, Ring, and lineal middleweight crowns with a unanimous decision victory over Miguel Cotto on November 21, 2015, in front of a sold-out crowd of 11,274 at the Mandalay Bay Events Center in Las Vegas.

At Cotto’s request, the bout was held at a catchweight of 155 pounds. Despite Cotto’s remarkable effort and smooth movement throughout the fight, the judges clearly favoured Alvarez’s superior power and accuracy, awarding him 117–111, 119–109, and 118–110.

In October 2018, Alvarez announced for the first time in his career that he would fight 31-year-old British boxer Rocky Fielding (27–1, 15 KOs) for the WBA (Regular) super-middleweight title at Madison Square Garden in New York City, New York on December 15, 2018.

DAZN announced on October 17, 2018, that it has struck a five-year, $365 million contract with Alvarez, under which his next eleven fights would be broadcast in the United States by the subscription sports streaming service. The agreement would start with Alvarez vs. Fielding and would replace his expired contract with HBO (which had also announced its discontinuation of boxing telecasts).

After repeatedly knocking Fielding down with body blows, Alvarez won the one-sided fight through a third-round technical knockout. After Fielding’s fourth knockdown, referee Ricky Gonzalez called a halt to the action.

On September 13, 2019, Alvarez revealed on social media that he would move up two weight classes to face WBO light heavyweight champion Sergey Kovalev on November 2, 2019, at the MGM Grand Garden Arena in Las Vegas.

After a contested first ten rounds in which Kovalev found success with his jab while Alvarez primarily used power punches, the latter produced a left hook, straight right combination in the eleventh round to stop Kovalev and become a four-division world champion.

Alvarez led 96-94 on two of the judges’ scorecards at the time of the pause, with the other scorecard tied at 95-95.

lvarez was engaged to Marisol González, a sports writer for Televisa Deportes and Miss Mexico Universe 2003. He has three daughters and one son, all of whom were born to different women.

Alvarez adores golf and claimed in 2020 that he plans to retire from boxing at the age of 37 and “play golf every day” in retirement. Alvarez married his longtime partner Fernanda Gómez in a ceremony at the Guadalajara Cathedral in Guadalajara, Mexico, in May 2021.

He also works as a boxing promoter in Mexico. Canelo Promotions, his company, was founded in 2010, and his business partners are his coaches, father-and-son combination Chepo and Eddy Reynoso.