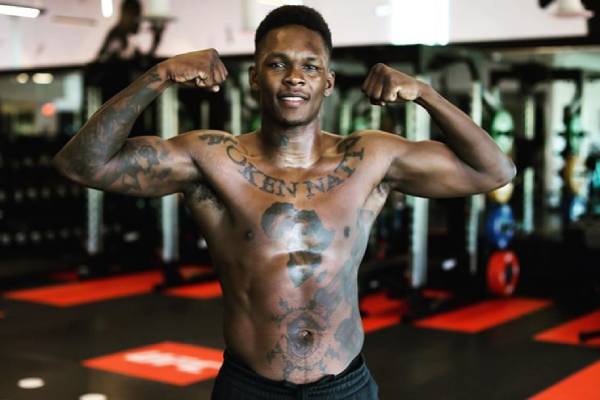 Adesanya was the eldest of five children born in Lagos, Nigeria. Oluwafemi, his father, is an accountant, and Taiwo, his mother, is a nurse. Adesanya attended Chrisland School in Opebi and was a member of its Taekwondo after-school club until his mother removed him due to an injury.

He moved to Ghana with his family for ten months in 1999, but due to his parents’ desire for their children to acquire a well-recognized higher education, he settled in Rotorua, New Zealand, at the age of ten, and attended Rotorua Boys’ High School. During high school, Adesanya was less interested in sports and more interested in Japanese anime such as Death Note and Naruto. Adesanya was bullied in high school and credits his desire to pursue martial arts later in life to the maltreatment he endured.

Adesanya enrolled in a Bachelor of Science in Computer Design programme at the Universal College of Learning in Whanganui after graduating from high school. He began training in kickboxing at the age of 18 after being inspired by the Muay Thai film Ong-Bak.

Two years later, Adesanya decided to discontinue his studies in order to pursue a career in kickboxing, and he went on to accumulate a 32–0 amateur record before going professional and competing in China. Adesanya relocated to Auckland, New Zealand, at the age of 21, and began training in mixed martial arts under Eugene Bareman at City Kickboxing, with future UFC fighters Dan Hooker, Kai Kara-France, and Alexander Volkanovski. Andrei Păuleţ, a Romanian-New Zealander, coaches him in wrestling.

Adesanya is fluent in several languages. He speaks Yoruba, Nigerian Pidgin, and English.

In December 2017, it was revealed that Adesanya has signed a contract with the UFC. On February 11, 2018, he made his UFC 221 debut against Rob Wilkinson. He won by technical knockout in the second round. He received the Performance of the Night bonus as a result of his victory.

In 2012, Adesanya made his professional debut, defeating James Griffiths via TKO. Before taking a two-year break from MMA, he won another TKO battle against John Vake. In August 2015, he returned to MMA and defeated Song Kenan via TKO. He went on to amass an 8–0 record, primarily competing in the Oceanian and Chinese circuits.

Adesanya’s next bout occurred on April 14, 2018, at UFC on Fox 29 against Marvin Vettori. He won the match by a two-to-one vote.

On April 13, 2019, Adesanya challenged Kelvin Gastelum for the interim UFC Middleweight Championship in the co-main event of UFC 236. In a back-and-forth battle, he won by unanimous decision. He was named Fight of the Night for this fight. The fight was widely regarded as the best of the year, with nominations from the vast majority of MMA press publications.

Adesanya made his professional boxing debut in November 2014 against two-time Australian champion Daniel Ammann. He was one of two wildcards selected for the first Cruiserweight Super 8 Boxing Tournament.

The event, which took place at Auckland’s North Shore Events Centre, was headlined by Shane Cameron and Kali Meehan. After looking to outpoint Ammann in the quarter-finals, he lost a disputed unanimous decision.

Adesanya re-entered the Super 8 tournament in May 2015, which was hosted at Horncastle Arena in Christchurch. The victor of the second cruiserweight series got NZD 25,000 as well as a new car.

He overcame fellow New Zealander Asher Derbyshire, who was seeded first, on his professional debut. Adesanya knocked out his opponent in the second round. In the tournament’s second fight, Adesanya defeated Lance Bryant by majority decision. Later in the tournament final, he defeated Brian Minto in a split decision.

In 2015, Adesanya competed in the Super 8 Cruiserweight event. He defeated Zane Hopman in the semifinals and defended his cruiserweight title with a unanimous decision victory over Lance Bryant in the final.

Before taking up boxing, Adesanya used to compete in dance competitions all around New Zealand. He demonstrated his passion of dance with a choreographed walkout at UFC 243.

After he retires from fighting, Adesanya plans to start an anime production company. His alias “The Last Stylebender” is a reference to the anime-influenced animated series Avatar: The Last Airbender. One of the show’s main characters, Toph Beifong, is tattooed on Adesanya’s forearm.

He became the first MMA athlete to sign a sponsorship partnership with Puma in September 2020. Adesanya was also signed as an ambassador for Stake.com in January 2021.

Many people chastised Adesanya in February 2020 for comments he made during the UFC 248 pre-fight news conference, in which he vowed he would make opponent Yoel Romero “crumble like the Twin Towers” referring to the September 11 attacks.

The next day, Adesanya apologised on Instagram, stating, “I was simply rambling and my brain worked faster than my mouth in a moment to choose the wrong euphemism.

“If you talk on the mike enough times, you’re likely to miss some bars. I did on this one, and I apologise. I’ll be more careful with my words in the future.”

Grant Robertson, New Zealand’s Deputy Prime Minister and Minister of Sport, came out against Adesanya’s “flippant comments” on his Instagram “Bro, I will f….n rape you” intended at fellow UFC middleweight fighter Kevin Holland on March 25, 2021. Roberston made a statement “I’m sure Israel understands, and I believe he deleted the offending tweet.

“It will be up to the UFC to decide what to do. But I would make it plain to him [Adesanya], and to anyone else, that rape must be taken severely. It is not a subject for which anyone should crack jokes or make snide remarks.”